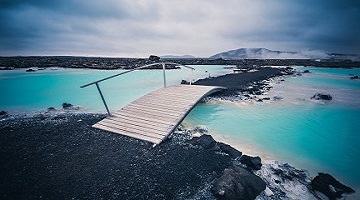 What to see in Iceland

"What to see in Iceland: 5 best places"

If you are planning to travel to Iceland and you are organizing your trip. In Secretos tu Viaje we recommend you the 5 best places that should be included in your itinerary:

1. With an area of 36.5 square kilometers Myvatn is the fourth largest lake in Iceland. It has a large number of small coves and more than 40 small islets. You will have to experience for yourself the impressive natural beauty of the area. Some of the most well-known sites are the lava formations in Dimmu Borgir resulting from a past active volcan, Mount Hverfjall a huge crater (The edge of the crater is only accessible by two paths, It is strictly forbidden to use other routes upwards or down). Krafla a 10 km boiler, and the east geothermal area of Namaskarour.

2. The geysers. No trip to Iceland would be complete without a visit to see the geysers. The Great Geyser was the greatest natural attraction in Iceland in the past. It used to erupt, a blast of boiling water and steam 80 meters high in the air.
Strokkur is now one of the most famous geysers in Iceland and can be seen when it erupts every 5 to 10 minutes. The Great Geyser is only 20 meters away from there. The peak reaches up to 20 meters high, an impressive sight. Everywhere you look you can see the sulphurous boiling landscape that has many smoky vents of hot and cold springs and springs.

3. The Blue Lagoon is an impressive natural feature in Iceland. One can not help but be attracted to this natural wonder. It is supposed to have healing powers with a water temperature of 40 ° C. The Blue Lagoon is a truly magnificent and unique experience, especially if you want to bathe in it when there is snow around it.

4. On a clear day in Reykjavik, the Snaefellsjokull glacier can be seen across the sea in the distance even though it is more than 60 miles away. It is believed that he has mystical powers since Jules Verne wrote The Journey to the Center of the Earth. The landscape offers impressive moors, beautiful meadows, rivers and small ponds, along with beautiful rock formations not to mention the black sand beaches. Being in Iceland was like being on another planet.

5. Thingvellir National Park is considered one of the most beautiful places in Iceland.

The splendor returns to Hagia Sophia

breakfast with an overlook at the desert